Rearranging the deckchairs on the Titanic 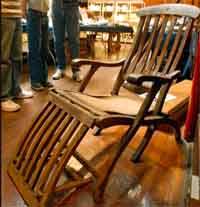 Rearranging the Deckchairs on the Titanic?
Silvia Wadhwa, CNBC. 6 Oct 2008

"Ridiculous activities in the face of crippling adversity."
(Maybe I should point out here that, contrary to common belief, the expression doesn't date back to the Titanic disaster at all, but to the 1970s and referred to a PR debacle during the US primaries at the time - - NOT unheard of even nowadays, eh?).

So, don't you get the feeling -- the teensy-weensy feeling -- that for the past year or so, that's precisely what our political leaders and leading bankers have been doing: rearranging those deckchairs on this our global financial market Titanic, while the hull of the big ship is balefully scraping along that big, fat, menacing iceberg?

Mind you, since Lehman went overboard overnight, it does seem as if the orchestra in the ballroom stopped playing and more and more of the first-class passengers were making a frantic dash for the lifeboats. But sadly, ethics have deteriorated since the good old days.
No more women and children first! It's everybody for his- or herself.

Comment by Rolf Englund:
Yeah, and a few Chairmen have been removed already

More by Silvia at CNBC

The author is a professor at the University of Massachusetts Lowell. A paper, The Quest for Shareholder Value: Stock Repurchases in the US Economy, to appear in Louvain Economic Review, is available at www.uml.edu/centers/CIC

Cash dividends are fundamentally different from stock repurchases. Dividends provide a return to those who hold stock, and hence maintain a commitment to the company. Yet executives have become enamoured by stock repurchases. Their abundant stock options give them an incentive to do buy-backs to boost stock prices even if this undermines long-term value.

Having spent billions on stock repurchases, some of the oldest Wall Street banks find that the subprime crisis has left them in need of cash to stay afloat.

A lot of pundits, myself included, are feeling embarrassed as the year's first quarter draws to a close. Once again, the booming stock markets have made caution look foolish. London's FTSE 100 index has gained 16 per cent compared with 12 per cent by the Dow Jones Average. I was accurate in predicting that Europe's "bubble" economies, the formerly inflationary EU member states where short term interest rates are tumbling to standard euro levels, would show the best returns. In three months, the equity market indices have soared by 40 per cent in both Spain and Italy.

We have to puzzle out, though, whether there is real value in today's markets or whether the madness of crowds has finally taken over.

Analysts are scratching their heads over London on a record low gross dividend yield of 2.7 per cent, or Wall Street on a record high price/earnings ratio of 27.

There is so much market momentum in many countries that it would be foolish to call the turn just now. But few people will be able to get out of, say, Ireland (where the stock market index has risen 80 per cent in 12 months) at the right moment.

That stock markets can make huge mistakes is easy enough to show. There was the spectacular case of the Japanese market in the 1980s. In 1989, Tokyo enjoyed a weighting of 45 per cent in the World index, which made it bigger than the US and five times as big as the UK. Last week, however, Tokyo's World index weighting slipped to 10.8 per cent, making it slightly smaller than the UK.

In the 1980s, Japan's huge savings flowed strongly into the stock market. But, in the 1990s, it has become agonisingly apparent that the corporate sector there has failed to deliver value to shareholders.

So, the diverted savings have instead generated a successor bubble in bonds, with a fall in yields to 1.5 percent. That, too, promises ultimately to end in tears.

The puzzle, after all, is that the booming demand for equities has generated so little new supply. Indeed, share buy-backs are all the rage in the US (where they reached $180bn last year) and increasingly in the UK (where they may well exceed £10bn in 1998). They are even starting to be seen in continental Europe, and may soon be made legal in Germany (RE: snart även i Sverige).

Reading recent congressional testimony by Federal Reserve chairman Alan Greenspan, I had a scary thought: He doesn't know any more than I do. By this, I don't mean to compare myself with Greenspan. He's forgotten more about the economy than I'll ever know. Beyond that, the Fed has a staff of 228 economists and is constantly briefed by companies, banks and governments about individual markets and industries.

What's sobering is that despite these advantages, Greenspan still seems genuinely baffled by the economy's dazzling performance and its future direction. Precisely. The old adage now seems to apply: If you're not confused, you don't understand the situation.

On the one hand, the U.S. economy is booming beyond belief. In the past year it has created 3.1 million jobs; the unemployment rate (4.6 percent in February) hasn't been lower since March 1970. Measured inflation is declining. In the past year the consumer price index has risen only 1.6 percent. Consumer optimism is at lofty heights; the Conference Board's confidence index touched 138 in February (1985 equals 100), a level not seen since the late 1960s.

On the other hand, the news from Asia isn't getting better. China's economy is slowing; Japan may slip into a recession (a drop in output). Indonesia and the International Monetary Fund are in a virtual state of war. Including China and India, Asia represents about 30 percent of the world economy. Yet its troubles haven't spoiled American spending or spirits.

One explanation is that the benefits of the crisis have come before the costs. The biggest benefit has been lower interest rates, which have triggered a surge in mortgage refinancings. Frightened by Asia's problems, global investors shifted funds into U.S. bonds and mortgage securities. Bond prices rose; interest rates dropped. Investors accepted lower interest rates in exchange for more safety.

Lower rates have also sustained a high level of home buying and selling. For 1998, Lereah expects 4.24 million existing homes to be sold, a record. Americans are moving into more appealing homes and, in the process, doing a lot of redecorating and renovating. (RE: Strålande tider för Ludvig Svenssons gardinfabrik, precis som på 80-talet i Sverige.)

The second big benefit from Asia has been the plunge in oil prices. Since early 1997 they've dropped from $25 a barrel to $15. The United States now consumes 6.8 billion barrels of oil a year. At the lower prices, consumers would save almost $70 billion.(RE: Eftersom detta är ett nollsummespel så förlorar Norge och Saudi m fl nästan 70 miljarder dollar).

America's careless confidence now contrasts dramatically with Asia's deepening fatalism. Economist Marc Faber in Hong Kong has long been one of the region's prominent pessimists. Indeed, he calls his regular commentary "The Gloom, Boom & Doom Report." But even he's stunned.

"The Asian crisis has left me shellshocked," he writes. "I have never [seen] such a total economic breakdown and massive destruction of wealth."

Economists at the Hong Kong office of Goldman Sachs predict that output (gross domestic product) in 1998 will shrink 5 percent in Indonesia, nearly 3 percent in South Korea and 1.5 percent in Thailand. Growth in China stems mostly from more efficient factories; it won't prevent rising unemployment. The Goldman Sachs economists figure that joblessness could jump 10 million in 1998.

Meanwhile, the White House wants Japan to spur its economy by cutting taxes or increasing spending by up to $80 billion. Skepticism abounds that Japan will do much. And Asia's full effects on U.S. exports remain to be felt. An irresistible force (the U.S. boom) and an immovable object (Asia's crisis) are colliding.

I admit to a pessimistic bias: a suspicion that our boom is more fragile than it seems. High stock prices sustain strong consumer spending, which sustains high stock prices. The economy is vulnerable to a dip in either; profits could disappoint.

I also admit that I've peddled this theory for a while, and so far it's a dud. Each phenomenon -- the strength of our boom, the severity of their collapse -- is outside recent experience.

Economic guesswork is reaching gigantic proportions. The simple truth is that I have no idea what lies ahead.

The larger truth is that neither does anyone else.

What should you do! My usual tip is: Invest in index-linked real interest papers.